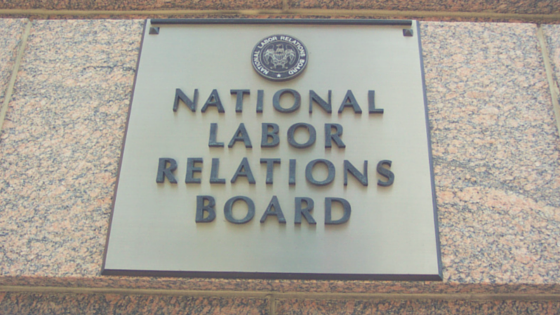 The National Labor Relations Board (NLRB) is reshaping fundamental labor laws and employment practices in favor of unions, with significant implications for franchise organizations and many other organizations. How significant is this? Franchise locations are nearing 800,000 in the USA providing 8.5 million Americans with jobs.

In an effort to make it easier for franchisee employees and contract workers to unionize, the NLRB has successfully put into motion legislation that could negatively impact the American Dream as we know it.

Here’s what you need to know.

The National Labor Relations Board (NLRB) is an independent agency of the United States government charged with conducting elections for labor union representation and with investigating and remedying unfair labor practices.

History of the “Joint Employer” Standard

Prior to 1984, the NLRB considered two companies to be joint employers if they both held the right to influence employment conditions for the same set of workers, even if one company did so indirectly.

However, in 1984, the NLRB narrowed the standard, such that both companies had to execute direct and immediate control beyond routine supervision over workers to qualify as joint employers. In other words, companies were only responsible for employees under their direct control.

A recycling plant (Browning-Ferris Industries of California, Inc. dba BFI Newby Recyclery) used a staffing agency (Leadpoint Business Services) to supply workers. The workers voted to form a union. The union (Teamsters) could negotiate with the staffing agency, but it could not negotiate directly with the recycling plant, unless the plant was deemed joint employers. The union requested that the NLRB review the case and reconsider its definition of joint employer relationships.

The NLRB emphasized that companies cannot limit their responsibility using contract provisions that state that the two companies are not joint employers, if it is clear that a common-law employment relationship exists in practice.

In addition, the NLRB clarified that it will not limit its inquiry to control over hiring, firing, discipline, and supervision.

The NLRB will consider a putative (presumed) joint employer’s control over the matters that may impact employment practices, such as the number of workers to be supplied, scheduling, seniority, overtime approval, and the assignment of work.

Implications of the Browning-Ferris Decision

The NLRB’s decision vastly expands the types and number of entities that can be held responsible for unfair labor practice violations and who may be held to have collective bargaining obligations regarding employees of a totally separate independent employer. Companies that rely on others to supply workers may have a difficult time avoiding legal responsibility for these workers and should be prepared for increased scrutiny from the NLRB.

In addition, the NLRB’s decision on joint employment may be a precursor to the approach taken by other government agencies, particularly the Wage & Hour Division of the Department of Labor (DOL), the Equal Employment Opportunity Commission (EEOC), and the Occupational Safety & Health Administration (OSHA, which is already aggressively pursuing joint employer liability in their investigations), etc.

The NLRB is currently litigating a case involving McDonald’s and its franchisees. As a result of the “Fight for $15” protests (aimed at improving the wages and working conditions of fast food employees), the NLRB has charged that the franchisees and their franchisor acted as joint employers and took retaliatory discipline against employees, including reductions in hours, disharges, and other coercive conduct.

The question to be answered during these proceedings is, “Can McDonald’s USA be held liable for alleged labor violations by its franchisees?”

The McDonald’s case will use the “economic reality test” imposed by the NLRB, which will provide additional specificity for franchise companies.

The NLRB has a two-part test for determining whether two entities share or codetermine the essential terms and conditions of employment:

As of January 8, 2016, the McDonald’s trial is pending and adjourned until further notice.

The full implications of the NLRB’s new joint employer standard will not be known until the NLRB begins to apply it.

Franchisors will continue to face greater uncertainty as the NLRB’s views on the new test of joint employer, and how it applies to franchising, unfold. This uncertainty will linger until there is:

Thus, it is far too early to predict how the NLRB will address the types of controls typically found in the franchise business model.

This information is not to be used as legal advice. It is for informational purposes only and is simply summaries of research and opinions.

To reduce the likelihood of being deemed a joint employer:

To protect and reinforce the franchise model as a whole:

I think we could all agree, grandparents have it made when it comes to grandchildren.

They get to enjoy spending time with them, spoiling them, guiding them, and giving them advice. Then, they’re sent home to mom and dad! The parents are the ones who have direct responsibility for the child’s actions. Parents love to take responsibility for their kids when they behave well. But, when they don’t, they say it must be because it’s the other parents’ kid! They can’t typically say it’s the grandparents fault. If the child were to commit a crime, the parents are the ones who have to answer for it. Grandparents have a degree of separation that protects them from that liability.

This changes lots of things. This means the franchisors will have to be every bit as involved in the child’s life as the franchisees. They will essentially have two sets of parents, and the original mom and dad will be left wondering what happened to the freedom to parent how they wanted to.

This grandparent analogy might not be perfect, but we hope it’s helped shed some light on the NLRB rulings and the implications could have on franchising, staffing, contract workers, and many more.

As we mentioned above, there is still much up in the air. But, we’ve already seen signs that OSHA, the DOL, and EEOC are will be following in the NLRB’s footsteps when it comes to this matter. We’ll do our best to keep you informed as changes will occur.

Subscribe to our blog for updates sent straight to your email.